Shape Your Communications: Don't Say It, Show It!

It is often difficult to convey an underlying message through dialogue alone, hence the importance of communicating ideas visually and shapes are a great example of this.

When observing the basic geometric shapes, a square, circle and triangle, shape theory relies on the concept that each of these have a psychological meaning. In other words, as soon as you gaze at a character or graphic, your brain disassembles the image to its basic forms and forges conclusions depending on the shapes. The direction in which you aim to communicate your ideas can therefore be guided and supported through the shapes you use. Here are some examples: 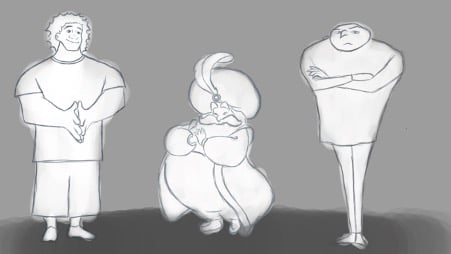 In the context of character design, shapes are able to convey a character’s personality or intents and therefore, communicate an underlying message. The silhouette and body language provide more information than facial expressions.

The shape of a square usually stands for a stability, strength or solidity. Square features are often evident in heroic figures (although not always), they represent control and warrior-like qualities. Communicating ideas through square characteristics can deem powerful, used as a voice of authority and therefore credibility. These characters are also found to be dependable and reliable meaning your ideas become more trustworthy.

Circles express safety and softness, their round shape can be graceful and enhance a character’s innocence. Figures formed of rounder characteristics are often likeable, engaging and even comical characters. If a character is likeable, they are more likely to retain attention and therefore informative communication can be passed as an example.

In nature, sharp angles are portrayed in objects we associate with danger, such as thorns and rocks. Hence, characters formed of triangles make great villains, yet, this is not their sole purpose. Triangles also provide a sense of direction, depending which way they point; a triangle pointing up can exhibit power and stability, similar to that of a mountain, a triangle pointing down, on the other hand, becomes unstable. A triangular pose in which the character stands can also suggest perseverance and determination (often a triangle facing upwards). 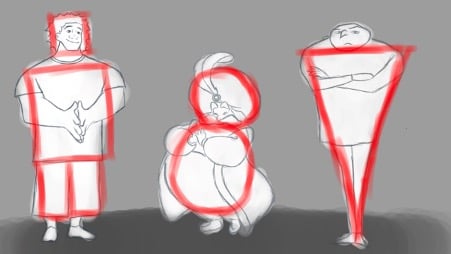 However, it is not often that you find characters illustrated through only one type of shape. And here lies the creativity! Mixing the shapes together allows for complex and therefore believable characters. By using squares and circles you can create a character who is powerful but also soft at heart. Varying the shapes and their sizes is important in making complex characters.

The examples in the images above are from heavily stylised animations, making them an ideal reference, yet shape theory can just as easily apply to characters with accurate human proportions. There are many choices of sharp or round edges, the overall shape of a hairstyle and the position in which the characters stand in. Hence endless possibilities in communicating ideas whether it is factual information, a comical message or a warning. 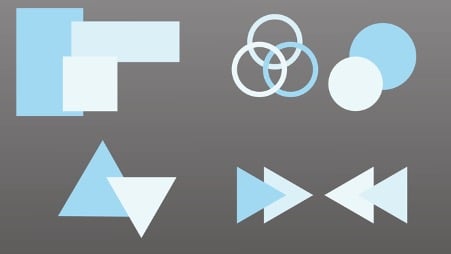 We often see squares on a sheet of paper or a button on a website. Squares and rectangles are some of the most common shapes used in graphic design. The mixture of straight lines and right angles create a sense of strength and reliability. Rectangles are often used for borders to contain the graphics. It is a shape which conveys safeness and security, similar to that in character design.

A circle is a much softer and therefore milder shape. They create a sense of eternity since the line is endless. Circles are often used for small buttons on websites or to outline a logo. They can be powerful in the sense that they convey wholeness and completion.

We see triangles on play buttons or as arrows, just like in character design, they have various meaning depending on the way they point. Pointing up, they show strength, pointing down the portray instability and pointing sideways they indicate movement. Consequently, triangles are used to direct the eyes, such as emphasising an important part of a design.

These are just a few examples of the way in which shapes are used within graphic design, and just like building characters, building graphics may require a mixture of these shapes. Your ideas can therefore be enhanced through the shapes within the designs of your characters, graphics, website layouts and so many others. Shape theory works brilliantly alongside other forms of visual communication such as colour or movement in order to anchor the desired concept.